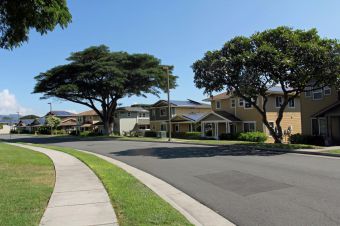 “Hunt Military Communities is wholly dedicated to ensuring that our communities are operating efficiently and with a minimal environmental impact,” said Greg Raap, Vice President of Hunt Military Communities, Hawaiin Islands. “Through the deployment of solar energy systems, we can help reduce energy costs and reinvest those resources into our communities, reaffirming our commitment to military families in Hawaii and across the United States. We recognize Hawaii’s initiative in championing sustainability, and the state’s significant military leadership. We so value Hunt’s partnerships with the U.S. Navy and the Marine Corps, both of which are deeply vested in the state.”

The installation of the additional PV systems further reduces OMC’s environmental impact, decreases reliance on non-renewable energy sources, and helps to lower electricity costs by approximately $3 million dollars per year for the PPV project, savings that are reinvested into the communities themselves. A few notable HMC reinvestment projects include large destination playgrounds and dog parks constructed over the last several years. Renovated residences include 251 historic homes governed by programmatic agreements with Hawaii’s historic preservation offices. OMC has also been able to award approximately 84% of its construction contracts to local Hawaii businesses and 70% to small businesses well above government requirements.

With more than 28 years of service in Hawaii, Hunt is a company that has long been recognized for its innovative use of underutilized government properties, as well as its commitment to creating premier master-planned communities that complement the cultural and geographical riches of the Hawaiian Islands. Hunt’s Hawaii projects reflect the company’s deep roots in public-private partnerships and sustainable projects.

Hunt Military Communities, the largest military housing owner, offers unsurpassed quality and service to more than 165,000 residents in approximately 52,000 homes on Navy, Air Force, Marine Corps, and Army installations across the USA. We do this through our core values: safety, kindness, efficiency, enthusiasm, and selflessness and our 5-Star Service commitment. With a 50-year legacy and a partnership with the Department of Defense, HMC strives to ensure the integrity of our military communities and the families who live there.

Hunt has developed eight projects on four islands, manages more than 7,000 homes at Ohana Military Communities, has grown to become the second-largest owner of multi-family homes, and is responsible for the ongoing management of more than 1,300 acres of land on the islands. Hunt’s Hawai‛i projects reflect the company’s deep roots in public-private partnerships and innovative projects.

As a Hunt employee, you will be helping our organization build value—and as your employer, we'll be committed to helping you build value, both personally and professionally. If you are talented, energetic, and customer-service oriented let's chat!